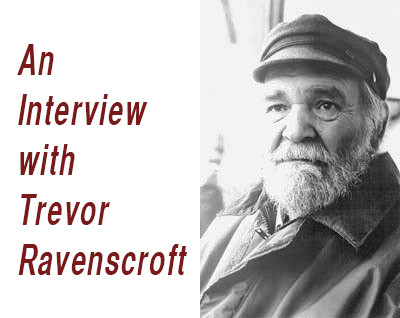 Fascinating interview with the leading metaphysical historian of the 20th century. A very rare recording from 1986 - interviewer Michael Fiertag.

Trevor Ravenscroft was described as the worlds leading metaphysical historian - a giant of a man in his field. He was the author of two books - The Spear of Destiny and the Cup of Destiny. The former tells the story of the spear of the Roman Centurion, Gaius Cassius Longinus used to pierce the side of Christ. Longinus was a centurion sent by Pilot to be an observer at the crucifixion. On seeing Christ's body about to be mutilated by the priests, he used his spear to pierce his side between the fourth and fifth rib. It was a method used by Romans at the end of a battle to dispatch the dead or dying on the battlefield.

The spear became an occult symbol of power and the book tells the story of the men who possessed it throughout history, many who used its power to change history itself. Such men as Herod the Great, Constantine, Justinian, Charlemagne, Frederick Barbarossa, and a host of others including (eventually) Adolf Hitler.

Trevor Ravenscroft in his book deals with how Hitler rose to power through the development of his occult facilities; how he furthered his aims through his conquest of the world through black magic and through recognising and utilising the power of the spear of Longinus.

His second book the Cup of Destiny is about the quest for the Holy Grail. He traces the origins of the story of the grail to Chrétien de Troyes and Wolfram von Eschenbach. He looks at the relevance of the grail today and how it can be used to develop spiritual facilities and attain a high level of consciousness.

Trevor Ravenscroft was born in England in 1921, went to a British public school, and subsequently  went to Sandhurst Military College before serving as a Commando officer in World War II. He was captured on a raid which attempted to assassinate Field Marshal Rommel in North Africa and was a POW in Germany from 1941 to 1945, escaping three times but each time being recaptured before ending up in a German concentration camp.

After the war he studied medicine at St Thomas' Hospital, later becoming a journalist on the Beaverbrook press. It was during this period that he met his teacher Dr Walter Johannes Stein - a Viennese scientist and historian and expert on medieval and ancient art. Stein was in fact a student and associate of the great teacher Rudolf Steiner.

It was through Stein's deep and earnest pursuit of occultism that he first met Hitler in Vienna when he was a student. He came to know Hitler personally, at a point where Hitler had come to learn of the legend of the spear and its power.

Ravenscroft for a time was spiritual advisor to the Shah of Iran.

This product hasn't received any reviews yet. Be the first to review this product!